Sadly, the DFIR blog has taken a nose dive over the past month.

But never fear, we DFIR bloggers are alive (at least, barely).

MattP is taking a much needed hiatus to recover from some back issues, and MikeT is, as always, busy as ever.

Myself? I've spent a month in Huntsville, Alabama working on a Plantation site (Oakendale Plantation, 1820s to 1942); plus the last few months getting (a) my current house on the market, and (b) dealing with all the things involved with building a new house.

One UNFORTUNATE side effect of (a) and (b) is that almost all of my 40k stuff is safely sitting in a storage unit in an effort to de-clutter the for sale house.

One FORTUNATE side effect of (a) and (b) is that I have been able to spend the last month or so getting my head wrapped back around the Mark II version of WARMACHINE.

Back when Warmachine was a very new game on the market (2003-2004), MikeT and I were lured by its "skirmish style" of play, and the low-cost start-up element of the game.

I was lured by the sexiness of the CRYX faction, while MikeT dabbled in both the CYGNAR and PROTECTORATE OF MENOTH factions.

But after a few months, we both gravitated back towards our 40k addictions.

Just over a year ago, the Warmachine bug hit me again, and it turns out, it was FATE dealing me a blow - Warmachine was about to embark on its "Field Test" to update to "2nd edition" (called Mark II in the Warmachine World).

But, just about as soon as the Mk II Field Test wrapped up, my little princess began Gymnastics, closing down my Thursday nights for a long time. Given that my FLGS, ALL FUN & GAMES, did Warmachine on Thursday nights, I quickly found myself back in the loving arms of my Eldar and Chaos Marines of 40k.

Well, full circle has come, it seems. The Warmachine bug bit me again a few months ago. Given the (a) and (b) I outlined above, it was a no-brainer to get back into Warmachine. After all, the closet FULL of 40k stuff had to go to storage, but my Cryx collection took up all of two Army Transport foam trays - a couple purchases later, and a third Army Transport foam tray, and I've got all the Cryx I need for most major events. Plus Side is that it takes up practically no room in my clutter-free house, so fits with my current needs.


But what would a DFIR post be without SOMETHING about 40k? It would be rubbish, I tell ya'... 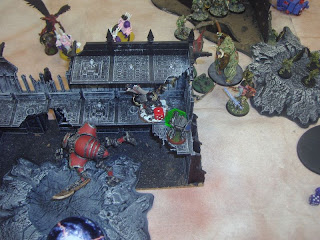 ust before the latest Warmachine bug hit me, our local 40k Apocalypse Group - APOC-ECLIPSE - had their SEMI-ANNUAL MEGABATTLE. I whipped up a bunch of Deathguard/Nurgle/Plague Marines for the event, including the PLAGUEREAPER I've posted about in the past, and also, THIS lovely masterpiece by UltraForge miniatures.

Eventually, I'll put some wings on this bad boy, because what good is a Daemon Prince that can't fly? (no good, I tell ya'!)

Interestingly, this model took me all of a couple of hours to paint. Seriously. Once primed black, I began painting the Plague Daemon at the start of a movie, and by the end, turns out Mr. Plaguey was finished. SWEET!


So there we have it. The first DFIR blog post in over a month. Of course, I'm on vacation next week and the following. But hopefully that will only put a couple week hiatus on this blog (fingers crossed!).