Ron over at FTW recently posted THIS blog entry. It is Ron's version of where he "stacks up" in this hobby, and is based on an article Jervis Johnson wrote in White Dwarf #354 (US).

I found this post rather intriguing, and decided it would be interesting for me to sit down and think about where I "stack up" in this tabletop miniature wargames hobby of ours. Plus, I'm not too shabby with spreadsheets and making 3-D pie charts, so bonus for me.

Problem is, when I finally sat down to map-out my 40k hobby, I realized it wasn't so easy.

My first thought was, "I'm mostly into this game for the playing aspect and the 'hanging out with friends' part of it." So I slapped a 66% into the 'gaming' item and a 20% in the 'camaraderie' item.

Hmmm... Doesn't leave too much space for all the other aspects of the hobby. So before moving on, I dropped the 'gaming' down to 50%.

Still, 30% for modeling/painting and collecting and background?

I'm not a huge fan of the painting side of things, but it IS fun. I do love me some fluff. And to a certain extent, I do enjoy the collecting side of things a bit, but I'm not the type that just must absolutely have at least one full-sized squad of every choice in a codex (although I do believe I have hit that mark with my Eldar collection...).

Still, 30% combined for modeling/painting and collecting and background?

So I had to scale back again. Thinking about it some more, long and hard, I realized I *mostly* like this hobby for the playing and camaraderie parts, but do really enjoy the other elements more than I initially thought. In fact, I'd go so far as to say *almost* as much as the gaming/chumming parts.

So in the end, I scaled the playing and camaraderie parts back to 55% combined, and doled out the other 45% to the other 3 parts in equal measure.

Imagine that. My first hunch was that I predominantly liked the playing/hanging-out parts, but when I put some numbers to it, I actually realized that I like the parts of the hobby that one (generally) does alone more than I realized.

Ron (and Jervis), nice exercise in making me truly think about where I "stack up" in this hobby.

Just stumbled upon an old image of some Falcon cookies! We made them a few years ago to celebrate the release of the most-recent Eldar codex. They were super yummy and not a bit cheesy!

I need to vent a bit. Last month I ordered an Eldar Phoenix from Forge World. Added to the rest of the shipment, it qualified for the rapid UPS shipping. When it showed up all I got was the base hull and the flying stand (the nice Valkyrie one). After complaining, they told me that there was a problem with the mold. A week or so later they finally shipped the other pieces. When I received them, I was missing the two plastic canopies. Fast forward a 13 days later and the envelope containing those finally arive. They were crushed. I'm very disappointed and feel that I'm likely to take my business to eBay.

On the good side, they've responded to my e-mails quite rapidly and were very friendly. I never had to resort to calling.

How has it been going with your interactions with online vendors?
Posted by MattP at 6:14 PM 3 comments: 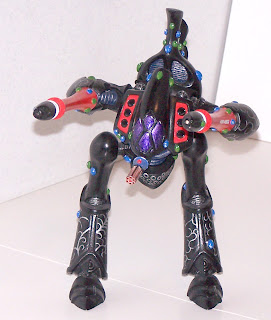 Did you ever notice that the original Eldar Revenant has the basic outline of the clear plastic Eldar vehicle canopy on it? Looks like that design is older than even the Vyper. Pretty cool!


I've been asked for some clarification on the Nightshade's torpedos. Here're some more thoughts:


What do you think?

I'm not ready to disclose the full scenario background yet, but the basic idea is that the enemy has discovered something ancient and powerful underneath a ruined fortress and they're planning to turn it on. The Eldar are trying to prevent this and have been working for decades towards this end, putting common foes in this enemy's path and drawing still others towards this planet. It is still very close. As a last resort, the Nightshade has blown through the blockade and will try to destroy the fortress either through concentration of weapons or by Kamakazi attack. 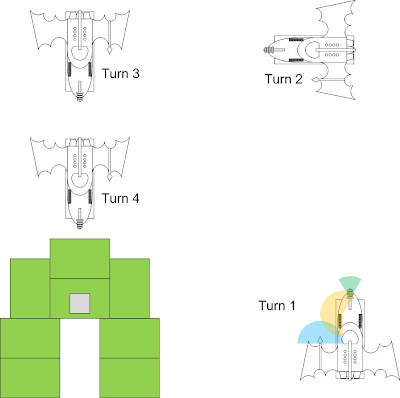 This is assuming, of course, that we get a play space big enough to fit all of that.

The real trick is going to be to make the Nightshade's engines tough enough that the enemy cannot just Deep Strike a couple dozen Terminators onto it and swat it out of the sky. It should be possible, though. It should also be possible to accomplish most of the victory conditions from the battlefield.

I've come to the conclusion that I'm going to have to bring in someone to help me run my Eldar. Once you get over 20k points, you really should have more than two hands on the project.

Congratulations to the guys at Siegeworld for a successful record-breaking game last weekend! Check out their gallery!
Posted by MattP at 9:25 AM 2 comments:

The above picture shows my current Eldar Apocalypse army with the addition of a couple of borrowed units. (All of the silver & black stuff is mine.) I've got a Warlock, Phantom, Armorcast Revenant, Towering Destroyer Knight, 2x Scorpion (type 1), 2x Tempest, Cobra (type 1), Vampire Raider, 2x Nightwing, Void Dragon Phoenix, Cloudstrike Squadron, 2x Fire Prism, a ton of Wave Serpends (including the old steam-iron looking one), and a bunch of Wraithguard, Wraithlords, Seer Councils, Fire Dragons, and Phoenix Lords. On the far end is my Star Dragon super-super heavy from the last post.

I'm working on the upgrades for our next battle, date TBD. I've already purchased a Forge World Revenant (They're tiny!), and a standard Phoenix. I've got permission from my wonderful, understanding wife to purchase the Forge World Phantom whenever it comes out and an ebay lead on some more Revenant pieces. The second Star Dragon has its hull more than half built. That feels like a pretty good upgrade. Of course, there is one more addition... 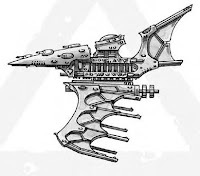 The above picture is a Battlefleet Gothic Eldar Nightshade. Man, I just love the look. It reminds me a lot of the Babylon 5 Minbari Sharlin War Cruiser, as do all of the BFG Eldar. I've decided, as part of a future Apoc-Eclipse scenario, I'm bringing an Eldar space ship.

Obviously it won't be a true Nightshade, since the BFG-to-40k scale would make it about the size of a shopping mall, but it will be based on that hull design. The thought is that it will be the Eldar equivalent of a PT boat (patrol-torpedo), manned by 50-200 Eldar and captained by Prince Yriel. (He was on an inspection visit when the call to arms went out.) They managed to break through the orbital blockade and are taking the fight to the ground forces.

The rectangular area under the hull is an 8' plastic banquet table, to give you a sense of scale. The main parts of interest are:

I've ordered an Eldar Revenant and Phoenix from Forge World. (My credit card still works fine!) Major frustration when they show up: The Phoenix shows up with only the basic hull and a Valkyrie flying base. No crew, no external weapons, no canopies, nothing. Now they tell me that the molds are broken and I can't get my replacement pieces until they fix the molds. Aargh!

I've finally started putting together my second Eldar Star Dragon super-super heavy tank. My original (at top of article) was cut from plywood while the new one is cut from 0.22" clear acrylic. I'm thinking of leaving part of it clear to represent the holofield. What do you think?

I really like the Revenant's pulsars, so I'm thinking of re-creating something like them and using them on the Star Dragon's front turrets instead of the wood half-eggs that I used on the first one.

I consider myself extremely lucky in finding some very rare old minitures. A now-gone miniatures company, Ronin, made some non-licensed Heresy-era Primarch models. I got the Phoenix Knight and the Lost Son. I'm looking forward to putting those guys on the table. I'll be using the Phoenix Knight as Fulgrim's Doppelganger, a daemon prince in my Emperor's Children army. I'm also working on a Heresy-era Sons of Horus force for Apocalypse battles only which should be pretty interesting.

The interesting thing about that Lost Son miniature. I got mine for about $50 and have since then seen it on eBay for anywhere from $40 to almost $300. I'd probably be willing to part with it for the high end, but would never for the low end. Truthfully, odds are that I will never see these miniatures available again, so it's probably a good idea just to hold onto them.

I've acquired an airbrush to help with some of my big models. (Again, the credit card recovered from surgery just fine.) I got a Badger 200. I also got a nice garage compressor and the hose to connect the two. It's my plan to run a hose from my garage up to my hobby room and then paint up there, but I am no where near healthy enough to do any of that at this time. I'm not healthy enough to get my hair cut, so I think cutting through the ceiling will have to wait.

I also wanted to wish my friends at Siegeworld good luck this weekend!
Posted by MattP at 10:22 AM No comments: