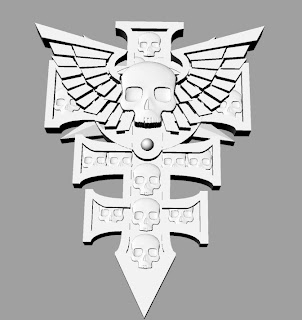 What have we been up to, you may ask?  As you can see from the picture above I've started doing some very basic 3D modelling including some not-yet-released things for Tom from the awesome Blood & Skulls Industry.  (The above item might be considered a little too close to home to be sold at any store, but it was fun to do.)

I've also finally completed the build of the first four Warhawk models (as seen on the very top of this post), with the first one of those nearing completion.  36" long cut from five panels of 0.22" acrylic and several pieces of 0.08" acrylic detail.  Designed to tote either four Land Raiders or six Rhino-sized vehicles, they are absolutely massive and I suggest you check out the links.

In preparation for an upcoming Disney trip we acquired a Flip MinoHD from TigerDirect.  Fellow DfIR blogger MJ and I played a 3,000 point Spearhead game which we recorded.  I tried out the video editing software that came with the Flip.  Great camera, terrible software.  While we won't be using it next time, we figured we could post the video anyway.  Enjoy!
Posted by MattP at 9:19 AM